Path Intelligence (featured last December in TechCrunch) makes a technology that monitors cell phone use to develop traffic patterns for malls. Basically, they install a few boxes in a mall, and then the mall owner can track cell phones by signal triangulation as shoppers walk through the mall.

The ostensible use is to to view traffic patterns. The company has been around for a couple of years and is now starting to get traction in the UK, with two malls using it, and three more on the way in the coming months.

They track by IMEI code, which is theoretically anonymous (except that one can match an IMEI code to a person’s real identity through the subscriber’s phone company, an area where there is still some legal fuzziness from a law enforcement perspective). 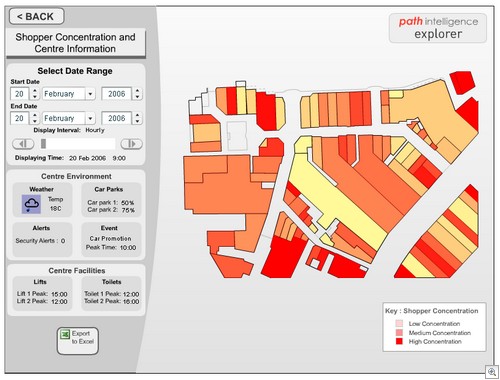 You can watch a demo of the technology in action at the company’s website, here.

The Times recently wrote about the technology, quoting the UK Government as having given “cautious approval” of this technology:

The Information Commissioner’s Office (ICO) expressed cautious approval of the technology, which does not identify the owner of the phone but rather the handset’s IMEI code – a unique number given to every device so that the network can recognise it.

But an ICO spokesman said, “we would be very worried if this technology was used in connection with other systems that contain personal information, if the intention was to provide more detailed profiles about identifiable individuals and their shopping habits.”