Our good friends at Sophos anti-virus company have released their tabulations of the geographic distribution of spam relaying computers. It isn’t news that the U.S. has the most (13.1 percent) but it IS big news that China has dropped off the Sophos top 12 list.

Graham Cluley at Sophos blogged: “The latest ‘dirty dozen’ stats from Sophos, examining the top twelve countries which are relaying spam from compromised computers, show that China has dropped off the list.

“A new dirty ‘gang of four’ – South Korea, Brazil, India and their ringleader USA – account for over 30% of all the spam relayed by hacked computers around the globe.”

It’s been generally accepted that the U.S. has always led the pack in this statistic because it was the first country out of the chute with adoption of PCs and Internet usage. Along with large numbers of machines on fast internet connections comes bot infections (responsible for a load of spam.) Basically, the botnet operators go looking for victims with good machines on fast connections.

Although the U.S. has been in the “dirty dozen” for some time, a longer view shows that it’s less bad than three years ago.

It’s just a numbers game though. The ugly fact is that the spammers haven’t gone away, they’ve simply set up shop (or infected machines) in countries that are “coming on line” with more machines with faster Internet connections in the general population. In the Sophos figures, India has risen to second place (7.3 percent) from 11th in 2007 and Brazil rose to third place (6.8 percent) from 9th in 2007. South Korea which has had great Internet connectivity remained in fourth place, although its share dropped from seven percent to 4.8 percent. 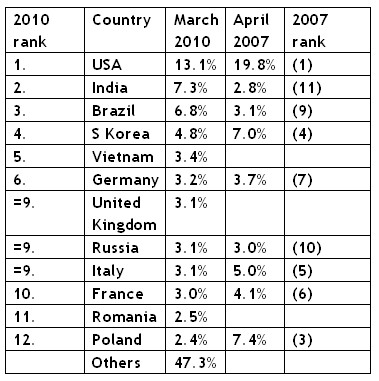