The problem with Live

So now Microsoft is going to pay for results. This is the kind of strategy I would figure coming out of Ask.com (or the old iWon). Not from Microsoft. And it won’t work in the long run. People search to find things. If they’re not finding what they want on a search engine, they won’t use it. And they won’t care about freebies and cash.

I’ve stuck with Google ever since. It’s quite simply the best search engine available.

When someone comes up with a better search engine than Google, I’ll certainly look at switching. And I’ll know, because word gets around to people like me when something is better. It spreads like wildfire throughout a technical community.

Microsoft’s problem has nothing to do with its marketing, giving cash back, or what have you. They are in a real quandary: This is one area where gobs of technical leadership is required.

Microsoft is a superbly run company, with many brilliant engineers. Now, I feel bad saying this next thing, because I have a lot of close friends at Microsoft (and I also have a lot of ex-Microsofters working here). But I would respectfully question if the company is internally wired to be a real technology leader. The business side has relied on the OS and low pricing (e.g. free) to push adoption in the past. Their products have always been decent, but rarely revolutionary. Only evolutionary. Now, the chickens have come to roost, because Microsoft is faced with one area where they are simply not innovating as fast as the compettition, and they won’t win unless they do. And they are worried (rightfully) because Google’s SaaS offerings are going to blow them out of the water if they don’t get their online strategy worked out.

Yahoo faces a similar problem. I downloaded some thing from Yahoo the other day for my Blackberry. It was crap. Slow, piggish, and difficult to use. In my eyes, the merger of the two companies would have been similar to what’s currently being proposed with Blockbuster and Circuit City: The flawed business logic that “two wrongs make a right”. Ballmer was right to back out.

Here’s a search for “Hospitals in Spokane, Washington” in Live: 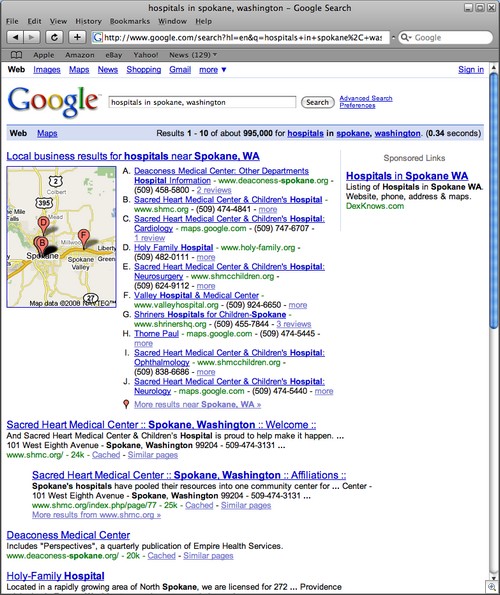 How about something more practical: I’ve arrived in Clearwater, Florida, and want to find a place to eat. I input, into my Blackberry, “places to eat in clearwater, florida”.

With Live, I get the first hit being an appliance repair company: 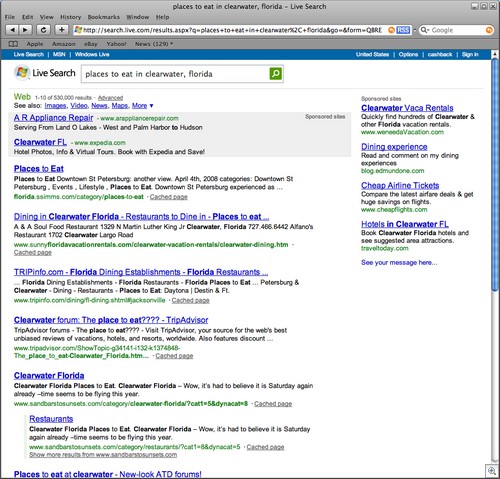 Oh, wait! It’s a sponsored link. But I can’t tell unless I look closely, because apparently Microsoft is trying to get more click-throughs for advertisers by making it impossible to tell if something is real or sponsored. That’s BS and backfires when people are actually trying to find something.

With Google, of course, I get something relevant right off the bat:

The difference is that Google’s first priority is making a good search experience (incidentally, the purpose of a search engine), and then advertisers. And to top it all off, Google implements beautifully on the future platform, mobile devices.

Oh, and while we’re at it, look at the difference between a search for my product, CounterSpy, between Google and Live. Do you think I’m happy about that? More importantly, do you think the customer is well served?

Now, I don’t want to be completely unfair. First, I’m not a heavy Live user. And Live is not that bad (for some searches, you may even prefer it). Plus, Live maps has some nice features (incidentally, it seems to locate some addresses that Google simply can’t — work to be done there, Google). But if I were Ballmer, I would do whatever I could to make Live the best product against Google. And skip the cash gimmicks. It will only buy a temporary bump, but won’t affect a long-term secular trend.