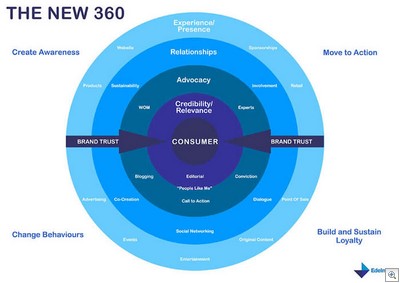 There’s revelations coming out that mega PR firm Edelman created three “independent” blogs for WalMart (called “flogs”).   The first one that was outed was “Wal-Marting Across America”, a travelogue of a couple of RVers that was found out to be paid Edelman staffers.  Now, MediaPost reports that two more blogs, PaidCritics and a blog run off of Working Families for Walmart were all manufactured blogs.

As Mya Frazier writes in Ad Age (link here via Walmartwatch), “It’s ironic that Edelman Worldwide helped to write the Word of Mouth Marketing Association’s code of ethics, which states: “Honesty of identity: You never obscure your identity.”

Edelman got tricky and got caught with their hands in the cookie jar.  Will this make a difference for WalMart’s brand?  Hell no.  WalMart is virulently hated by a minority of people, tolerated by a larger group and loved by RVers and shoppers (ostensibly those who are at or below the median income line,  where every penny counts).

But PR agencies have been playing games like this for a long, long time — with an explosion around the turn of the century.  Smarmy PR types have used deceptive means to craft public opinion for as long as there has been a press, except over the 100 years, it’s evolved into a fine science of sleaze.  There’s the obvious ones, like global warming — it’s “unproven” and “junk science” — the very words implanted through repetition in the American public originally through oil company funding of The Global Climate Coalition and now by groups such as the Competitive Enterprise Institute and Frontiers of Freedom (please, I’m not making a political statement). And then there’s the not-so-obvious ones, like the drumbeat of the of the Committee on Public Information, which crafted US opinion on World War I; and in technology, McAfee’s predictions of worldwide apocalyptic chaos from the Michelangelo virus – an act which transformed the antivirus industry from a largely shareware model into a real business.

Covert control of public opinion has been the hallmark of 20th century PR, and it hasn’t served us well at all. It’s just that now, with the ease of transparency on the Internet, it’s much easier for them get caught.  But it’s still there and quite a part of our society.  The pharmaceutical industry is built on PR (how many “syndromes” and diseases can you actually make up to sell more drugs?), as are many other industries.  How many “thinktanks”, “grass-roots” organizations and “independent studies” are the work of PR agencies?  Some are obvious, like Hands Off the Internet (with their silly video), which a clearly disclosed membership roster. But most are not-so-obvious.

Question “facts” until you’ve verified them yourself, question authority and always be skeptical anything you read in the paper or on television until you’ve checked it for validity.  You’d be surprised as to how many times there’s a crafty PR person behind popular “opinions”.  Our only weapon against it is our own intelligence and our willingness to go against the tide.

And read the client lists or practice specialities of the big PR agencies — Edelman, Hill and Knowlton and others.