The Dutchman Attacks
According to an article in InformationWeek, 180 Solutions was the victim of a Denial of Service (DoS) attack back in September.

Noted adware supplier 180solutions said Thursday that it was the target of an alleged denial-of-service (DoS) extortion attempt by one of its own distributors, a Dutchman who, with help from two others, created a botnet of some 1.5 million machines.

The admission not only revealed some of the behind-the-scenes business that goes on in the adware world, but identified the American company that Dutch law enforcement officials said had been victimized by a trio of men arrested last month.

In other 180 news, we have another “In the Wild” pic for you today. It is a 180 download alongside a CoolWebSearch infestation — not only 180 but also Comet Cursor Starware was observed being foisted on our test machine. 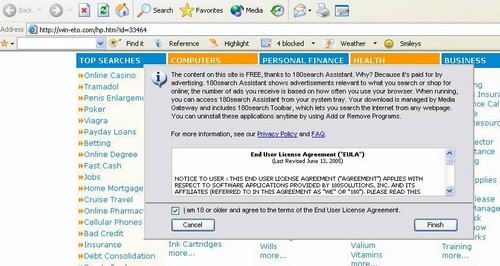