Today I saw a Youtube account with an array of random World Cup moments cobbled together. Nothing particularly unusual about that, but what did leap out at me was the likely reason the reason the account exists at all – the World Cup stuff looks like a lure to get them to watch this: 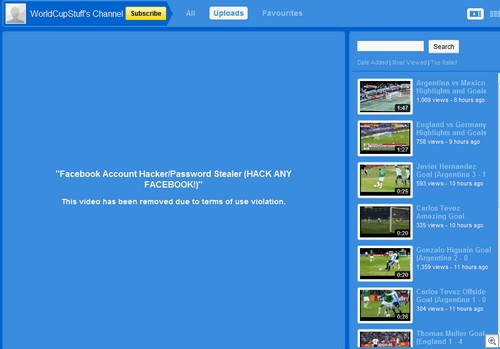 “Facebook account hacker / Hack any Facebook”, it says. As you can see, the video has been removed – and quickly (after something like nine hours, which is remarkably fast for a Youtube script kiddie video). We’ll find out why the video was removed so quickly a little later on, but for now let’s take a look at what we’d have grabbed if the video was still there.

A blogspot spamblog seems to be the final destination… 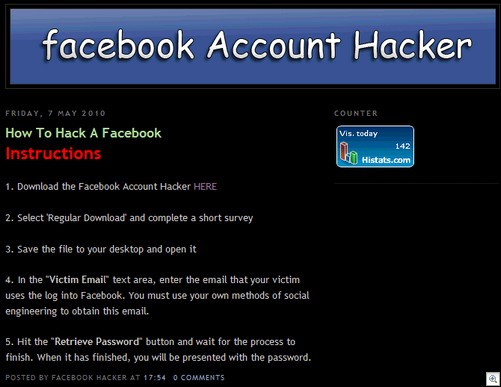 142 visitors in a few hours for a spamblog with no content on it other than these “instructions” which point to a download link? The mystery deepens. Here’s what you see on the download page:

Yes, it’s one of those surveys where you sign up to nonsense in return for something that probably wasn’t worth the time you put into it. More often than not, you’ll find you’ve signed your life away to marketers and also downloaded an infection file (you don’t honestly think the “Hack any Facebook account” program is going to do what it says on the tin, do you)?

As for why the video was pulled (and also how the spamblog has had so many hits in a few short hours), we need to take a quick jump over to the website of UK newspaper The Daily Mail. In their coverage of the England Vs Germany match, they’ve seemingly grabbed the first random Youtube clip they could get their hands on. Unfortunately for them, it was this one: 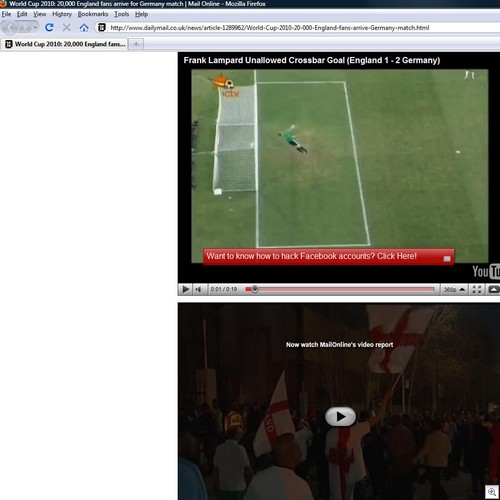 Whoops. That would explain the traffic spike for the spamblog, and also why Youtube have pulled it – looking at the comments from the article, it seems many readers with Youtube accounts have reported the video.

At time of writing, the video is still embedded – it’s pretty harmless now, but I must admit to being baffled how someone could miss the large red box with the “Hack Facebook accounts” text in it. And don’t get me started on the football match, either…