A Tumbldown in Spam Links

“Questions cannot contain links?! – I tried to send a link to someone and Tumblr told me this. SINCE WHEN?!”

Since now, apparently. Tumblr has a feature where you can ask the blog owner a question on, well, anything you like. Depending on settings, the people asking the questions can be registered users or anonymous (something that Tumblr discourages you from doing in the options menu, as the potential for trolling, spam and abuse is high). 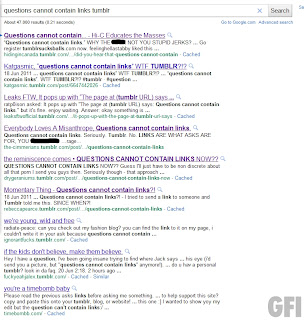 People aren’t happy – you can no longer post links in questions to blog owners, and this also means you can’t post images in replies. Responding with animated gifs and static images is an established method of communication on regular Tumblr blog posts, and this hasn’t gone down too well with the userbase.

Why would Tumblr do this?

Well, it seems to be a response to one (or several) recent heavy duty spam attacks. For example, I turned on Anonymous questions on my own blog not so long ago, just to see what came through.

This is what came through.

Oh my, a random crush confession from a total stranger on the Internet! Posted anonymously! And there’s two of them!

People wouldn’t be silly enough to click this, right?

…oh. The link has been flying around both email and IM, with Tumblr taking the top “our website is under attack” spot. 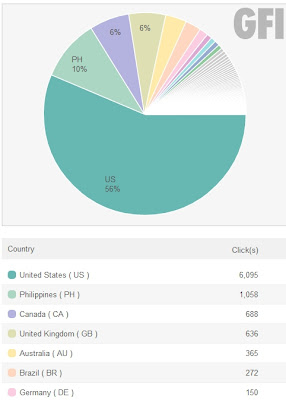 6,000 odd users from the US have clicked, the Philippines are in second place with just over 1,000 and Canada are battling it out for third place with the UK.

With regards Tumblr itself, this is where people are clicking it from:

This does, of course, mean that 300+ users are pretty much this guy: 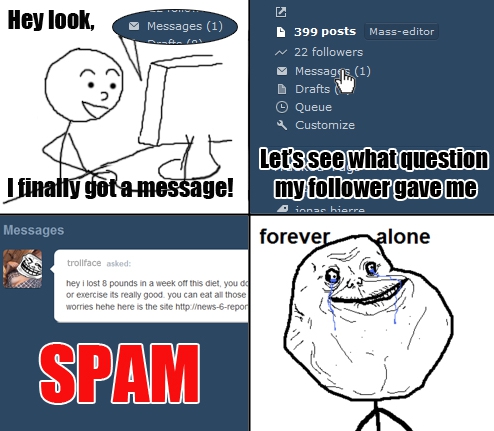 There were a few of these links doing the rounds, the main one leading to a (now deleted) spam post on a forum. According to users there were viagra spam links in circulation, but we can’t confirm this. Either way, it’s a large serving of spam which (presumably) has convinced Tumblr to wheel out the following “feature”: 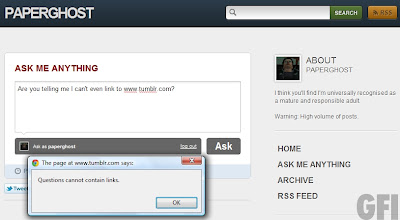 While this may seem like a decent enough solution, getting around the link blocking is ludicrously simple and all this may end up doing is restrict legitimate users while the spammers take all of ten seconds to work around the block.