Airlines take it to the streets

This is extraordinary and example of how technology may very well trump the old-school oil companies and commodities markets. First, it’s pretty gutsy for the companies to do this, and secondly, it’s a good example of corporations pushing grass-roots activism through online methods.

Major airlines are now lobbying their own customers to get Congress to do something about speculators. Speculators are arguably part of the raeson for the rise in prices, an issue I highlighted earlier on this blog.

Here is an example of what I received today. Millions of others are receiving the same letter today. 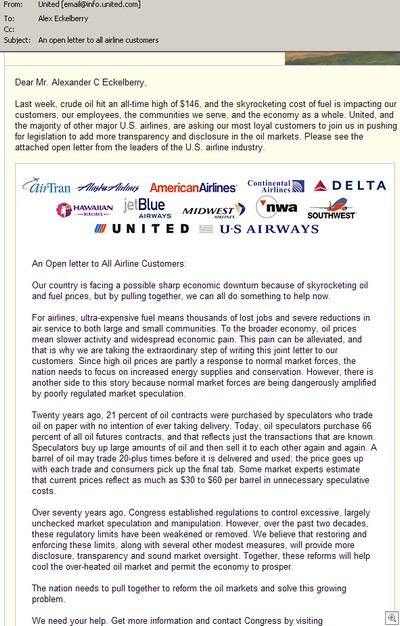 An Open letter to All Airline Customers:

Our country is facing a possible sharp economic downturn because of skyrocketing oil and fuel prices, but by pulling together, we can all do something to help now.

For airlines, ultra-expensive fuel means thousands of lost jobs and severe reductions in air service to both large and small communities. To the broader economy, oil prices mean slower activity and widespread economic pain. This pain can be alleviated, and that is why we are taking the extraordinary step of writing this joint letter to our customers. Since high oil prices are partly a response to normal market forces, the nation needs to focus on increased energy supplies and conservation. However, there is another side to this story because normal market forces are being dangerously amplified by poorly regulated market speculation.

Twenty years ago, 21 percent of oil contracts were purchased by speculators who trade oil on paper with no intention of ever taking delivery. Today, oil speculators purchase 66 percent of all oil futures contracts, and that reflects just the transactions that are known. Speculators buy up large amounts of oil and then sell it to each other again and again. A barrel of oil may trade 20-plus times before it is delivered and used; the price goes up with each trade and consumers pick up the final tab. Some market experts estimate that current prices reflect as much as $30 to $60 per barrel in unnecessary speculative costs.

Over seventy years ago, Congress established regulations to control excessive, largely unchecked market speculation and manipulation. However, over the past two decades, these regulatory limits have been weakened or removed. We believe that restoring and enforcing these limits, along with several other modest measures, will provide more disclosure, transparency and sound market oversight. Together, these reforms will help cool the over-heated oil market and permit the economy to prosper.

The nation needs to pull together to reform the oil markets and solve this growing problem.

We need your help. Get more information and contact Congress by visiting http://www.stopoilspeculationnow.com/.

Our only hope to bypass the strangehold of Big Oil (and it is a strangehold, despite all the PR otherwise) is through technology advances — by getting citizens active, by pushing bozo politicians to do the right thing, and by creating new, leapfroging alternative technologies.