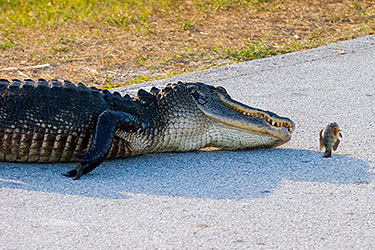 Robert LaFollette, our creative director, took his wife down to the Everglades (about 3 hours south of us) to “shoot alligators” last weekend.  Not with a gun, but with a Canon digital camera (a 20D with a Canon 100-400mmL Pro Lens).

They stopped in a park for a bit and were sitting near a pond eating sandwiches, when Robert stepped a few yards away from his wife.  He heard a scream, and turned to find his wife running from a very friendly alligator lumbering over, interested in her sandwich.   Robert ran over and tried to distract the gator, to no avail.

Fortunately, some local fisherman threw some fish at the gator, and he went off to munch on the fish. Robert and his wife took off as quickly as they could.

Now, it’s not usual for gators to get near people like this.  They actually aren’t much interested in humans (at least large ones).  However, just like any other animal, they start to see humans as a source of food when humans make the mistake of feeding them.  Robert was told later by the park ranger that the only reason the gator walked up in the first place was probably because the local fisherman had been feeding the alligators — an illegal offense.

Robert has more pics of the whole experience on his blog, here.