Azoogle, a fairly well-sized 3rd party ad network, has canned 180Solutions and Direct Revenue.  That means they will no longer be placing ads through these adware programs. I was grumbling about third party ad networks at the Antispyware Coalition workshop and am glad to see some movement here.

AzoogleAds terminated their relationship with 180solutions (MetricsDirect) today and DirectRevenue will be terminated as of March 3rd. Sources inside AzoogleAds said these relationships are being terminated due to the feedback that was received during the Anti-Spyware Coalition Public Workshop: Defining the Problem, Developing Solutions earlier this month which the Company attended. It’s great to see this move by AzoogleAds, and they deserve positive feedback no matter what you think of their past choices.

If you’re curious, you can hear Don Mathis (sp?) with Azoogle talk to a panel at the Antispyware Coalition here (at about 58:00).  He makes the comment that they have discovered that “greater transparency is expected” by ad agencies, etc., and said that adware advertising represents less than 5% of their revenues. However, it is clear from his discussion that they would still be fine with advertising through adware, if it was TrustE certified or something of the sort.

The situation with third party ad networks is worth briefly highlighting for those still learning the economic side of adware. (To cover the basics and the language of online advertising:  A website, called a “Publisher”,  contacts a third party advertising network and signs up with them to find advertisers.  Available space for advertising on the website is called “inventory”, which might encompass pop-ups or banner ads. The Publisher puts a snippet of code on their site, and the third party ad network goes off and sell ads for the website.   Examples of third party advertising networks are Advertising.com and 24/7 Media. This model extends to adware, in which adware companies sell advertising inventory —usually popups — that’s on PCs, as opposed to a website.)

At the Antispyware Coalition workshop, Ben Edelman showed a slide where a Columbia House ad had been delivered through adware back in October of last year.  However, it wasn’t placed by Columbia House.  It was placed through a string of intermediaries.

Here is the ad for Columbia House showing up through a popup from Icannews, an adware program.

So here is what the chain of intermediaries on this particularly Columbia House looked like: 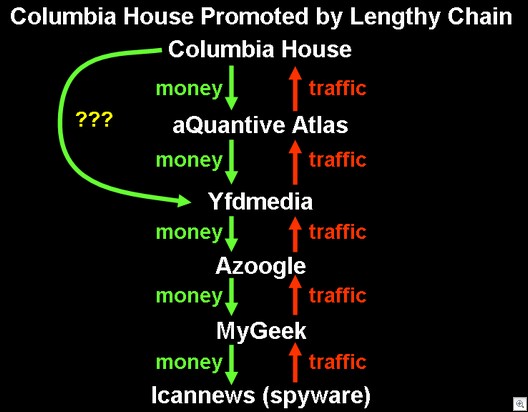 You can see the original slides here (and many thanks to Ben for his excellent analysis).

This little incident clearly demonstrates what a lot of people already know:  One of the ways adware companies make money is by selling advertising inventory through third party ad networks.  It also highlights the occasional complexity of the problem, as to how advertisers can control where their ads are placed.  In other words, if I were running marketing at Columbia House, would I really want my ads to appear in adware?  One hopes not. But it’s not always that easy to control where your ads actually land.  Even McAfee, a noted security company, has been found placing ads inside of adware.  I’m sure they didn’t want that.  But it happened.

Are intermediaries, such as we see above, always involved?  Not necessarily.  Ad industry pundit Pesach Lattin tells me that these types of complex intermediary relationships are only done on the CPA (Cost-Per-Action) side of the business, and “most large networks do not allow this and its usually done without their knowledge.” (“Cost per action” is a an advertising payment model where the advertiser only pays on actual results, such as a lead generated, not impressions or clicks.)

What’s the solution? One option is that that advertisers start getting signed certifications from their third party networks that no ads will be placed on adware.  If so, there’s no payment.  That will kill a big part of the economic incentive.  And, in fact, there’s already this type of pressure occuring from advertisers.

However, you’re relying on advertisers to have ethics, to care, or to even have a clue, and that’s not always realistic. There will always be unscrupulous advertisers and, one can assume, unscrupulous third party ad networks.  In other words, as a third party ad network, you may not get Chase Bank to advertise with you, but you might get “Fun n’ Breezy Vacations” or “Happy Mega Casino”.  If you can’t make it with the A-players, just lower your standards.

A third-party certification model is an option. According to a talk I had with AOL VP Jules Polonetsky  at the Antispyware Coalition Workshop, this was done with a fair amount of success in the pharmaceutical field, where illegitimate online drug stores were advertising through third party ad networks.  A certification program was put into place, and things got better. It’s also what TrustE is trying to do with their Trusted Download Program.  Through their certification program, adware programs will be certified, which means that third party ad networks will point at the certification as a validation.  Remember, though, that what they’re doing there is certifying adware.

In the end, though, there probably isn’t a permanent solution.  There will always be some third party ad networks who always advertise to some degree or another on adware programs.  We can at least attempt to lower the chances of that happening.