You know what would be a bad file to run on your PC?

(Translation: “give it a name (that you want)” in a southern Slavic language, probably Croatian.)

Hailing from somewhere in the Balkans – and called “Best Virus”, according to the folder it comes in – it ensures anybody on the receiving end will have endless amounts of fun – and by “fun”, I mean “endless amount of eye rolling horror.”

Designed to be sent via IM, chatrooms or pretty much anywhere else people will randomly accept and run executables, “Best Virus” bravely shrugs off the conventions of “stealth hijacking” so prevalent in recent years in favour of something a little more overt: 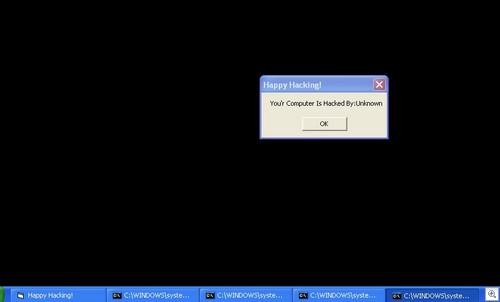 Depending on whether the already unstable file decides to work as intended or not, you may find certain processes killed and Windows Live Messenger given a quick trip to the scrap yard as your session is terminated. It may attempt to disable Task Manager, but during testing this didn’t seem to happen all the time.

Upon next login a popup box informs you that you were logged out of Windows Live because “Windows Live Messenger was logged in at another location.” However, this message doesn’t necessarily mean you’ve been phished, as there are number of reasons it can appear if using Windows XP. While I didn’t see any evidence of logins being stolen, go ahead and change your password if it makes you feel safer.

The good news is you can stop the endless popups and general bad day you’re having by holding down the power button until it switches off or pulling the plug. The bad news is that isn’t really recommended as sometimes – if you’re unlucky – it can do strange things to your PC. The Windows boot process can be a sensitive thing sometimes…

Thanks for the language help Dimiter.