Sources on a number of forums tell me that a certain application is going to be released into the wild in a few days, promoted heavily via sites such as Youtube to attract as many potential victims as possible. I thought it might be beneficial to get a head start on the bad guys and get word out before they hit their big green “Go” switch.

What is it? I believe the following screenshot can answer that question:

Yes, anyone with a hankering for CSI: Spyware will be able to get their fill when the so-called “FBI Fingerprints Scanner” goes live. As you’ve probably guessed, it’s a fake program designed to be tied up with whatever horrible infection file(s) the creator desires. It relies on hooking you with “stolen” FBI login credentials to access the (entirely fictitious) database. The supposedly stolen login details come bundled with the application, in case you were wondering. 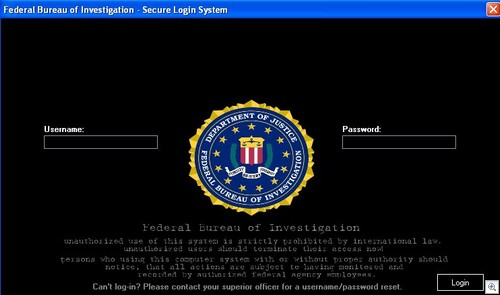 As fake applications go, it’s not too shabby – the wannabe FBI impersonator enters the login details, and is then asked to upload an image of a fingerprint scan into the system to see if there’s a match. In reality, you can use an image of just about anything:

I don’t know about you, but I start to question the legitimacy of any fingerprint scanner that accepts pictures of dancing bananas.

The program has a collection of FBI Most Wanted profiles built in, and it’s likely that more profiles will be added as time goes by.