Cio-Cio San (Madama Butterfly) getting back at Pinkerton?

Someone using the handle “strelaoz,” (do a web search for it) claiming to be an ex-lover, has been leaving comment spam on hundreds of web sites “exposing” details of a romantic relationship and jilting by an exec at Symantec. The comments usually accompany news pieces about the company.

While comment spam is usually a nuisance, this defamation campaign takes the art form to a higher level than one usually sees. It is possible that the details are fiction and the campaign is simply an attempt to damage Freer and/or Symantec. It represents an Internet threat that could be very difficult to defend against.

In one post, there seems to be an oriental connection too – Chinese characters in the text: 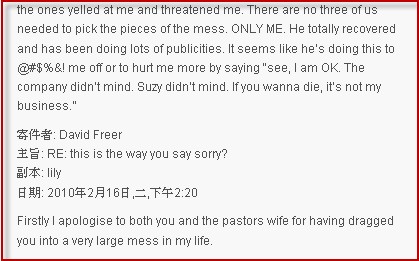 If one reads the details, the back story appears to be vaguely similar to the plot of the Puccini opera “Madam Butterfly” (well, ok, it isn’t Japan and there’s no baby.)

Whoever is behind this appears to be using a Yahoo account under the name of Jennifer Yin: 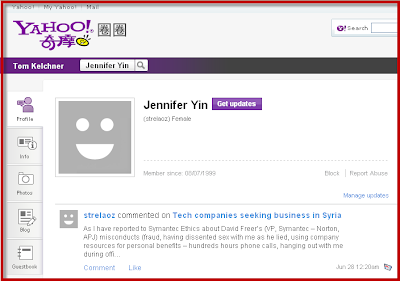