There is probably no one ANYWHERE on planet Earth who has not heard about Kanye West’s interruption of Taylor Swift’s acceptance speech for Best Female Video at the MTV Video Music Awards ceremony Saturday night. The world’s reaction to the story has become a story in its own right:

— President Obama, speaking off the cuff just before an interview with CNBC’s John Harwood, called West a “Jackass.” Almost instantly several people sent out the story on Twitter, in spite of the fact that such banter is normally considered off-the-record. AND, of course, Jay Leno picked up on THAT. Washington Post story here.

— There are now (Thursday morning) 21 fan-dubbed videos of the oft-used scene from the 2004 movie “Downfall” of Hitler histrionically complaining about West. (YouTube.com search “Hitler Kanye West.”) MSNBC picked up THAT story (“Hitler finds out Kanye West disses Taylor Swift at the VMAs”)

— The latest (today anyway) is http://kanyelicio.us/ On this site you type in a URL and the page appears with an overlaid picture of Kanye West and a message dissing the site. Story here: “Kanye West Disrespects Our Website” 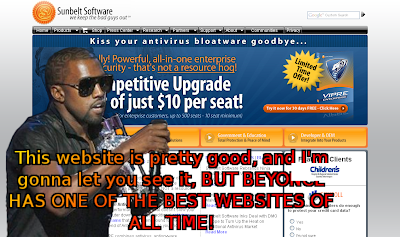 There probably hasn’t been such a reaction to public misbehavior since the “Korean Dog Poop Girl” of 2005. She is now part of the definition for “Internet vigilantism” on Wikipedia. I’ll imagine Kanye will join her shortly.

Oh, yea. West did apologize according to about a hundred stories everywhere.