Tom Baker was the best Doctor. Now that we’ve got that out of the way, you may have heard the BBC has created a downloadable Doctor Who game called “City of the Daleks”. It seems they released it early, but the game has caused a bit of an outcry. See if you can guess why from the EULA screenshot: 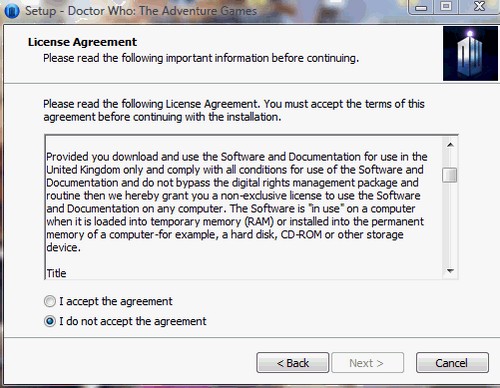 “Provided you download and use the software for use in the United Kingdom only…” That’s right, because the game is funded by the licence fee anyone in the UK can get it for “free”, but it’s currently unavailable to anyone outside that region – paid versions will be released at some point in the near future.

Of course, this hasn’t gone down too well with people seeing the below screen when trying to download:

All manner of proxies, tricks and mirrors have been deployed in an effort to get around the geolocational locking used to prevent non UK residents playing the game, which has also apparently resulted in people having a fiddle with program files to disable the protection.

This means in a short space of time numerous versions of the game are springing up to download, some of which seem to be legit:

However, there are many others out there with different file sizes, filenames or both.

Some sites are advertising downloads on Youtube, then going offline completely the next day like the site below did:

While they appeared to be linking to a file showing up as the correct download size (by itself not an indicator of legitimacy), there are others out there which seem to have gained a fair few MBs:

475MB? Shouldn’t that be 331MB? Also note that the name of the file has changed from “Installer-CityoftheDaleks.exe” to “Setup.exe”. I haven’t been able to grab the above file for inspection as it seems to be taking a bit of a hammering download wise, but I’d advise anyone desperate to grab a copy of the game from Rapidshare, Mediafire or anywhere else (there’s quite a few filesharing forums distributing copies of the game, too) to please be careful and scan with an antivirus program before running it.

DON’T follow the advice on this forum and “disable AV software” if trying to install copies of the game obtained from sources other than the official page, especially if you’re dealing with a random file you just grabbed from some site you’ve never heard of.

There are some things even the mighty sonic screwdriver can’t fix, and your PC is probably one of them.

/ Edit 1 – Someone has even uploaded a version to a site that requires payment by SMS to obtain the gamefile, to the tune of £10 plus network rates. That’s pretty spectacular.