Exclusive podcast: “This may well be the biggest telemarketing fraud I’ve ever seen”

That’s the words of a federal official on the bust of Suntasia Marketing (also known as Strategia Marketing, as well as a number of other names), an operation which was an allegedly major scam operation that was run out of a large office here in Florida.

Suntasia allegedly had telemarketers call up consumers and offer various travel programs. Customers were asked for their credit card number or checking account information and then got billed, often against the customers wishes. And it was allegedly impossible to stop the billing. (These types of billing schemes are called “negative option”, because the customer has to call to cancel, otherwise get billed).

You can see a video about the scam here.

And here is the picture of a telemarketer’s cubicle: 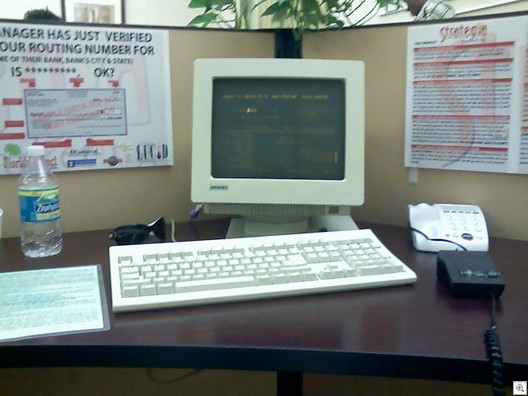 But how did they do it? I recently met a couple of ex-telemarkers from Suntasia and was curious about their story. Better yet, I decided to record the conversation, which you can hear for yourself.

Stephanie: Well, I started just listening on the phone, you know, to see how they actually talked to the people and how they dealt with the questions that they would ask. And then I started getting on the phone and they had me rebuttal (handle the customer’s objection), rebuttal them. People would not want to give up their account numbers.

What we did is, they would say, “No I’m not going to verify my account number,” and we had to rebuttal them. “Well your account is your member ID to your bank.” And they would say no, “I’m not giving it to you.” We had to keep rebuttal, rebuttal, rebuttal. And then finally they gave it up and they, you know, verified their account number and then we put them into the recorded line that they are not being billed, charged for anything TODAY. Which the main key word was for you to say “TODAY.” Because that was stating to the recording that they are not being billed for that day, but that they’re going to be billed for the next, and the next, and next days to come.