I’ve been seeing a lot of questions pop up in relation to a website involving a “free Pokemon MMORPG”.

Shall we take a look? Note the server indicator at the top, which claims there are 685/700 spots being used.

It all looks very nice: 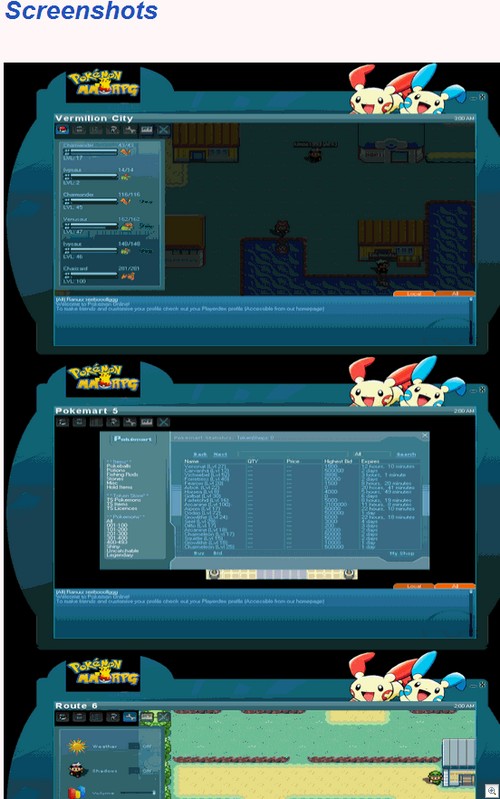 Is this going to end in disaster? Why yes, it is.

Click any of the “Play Now” buttons and a prompt for Hotbar appears: 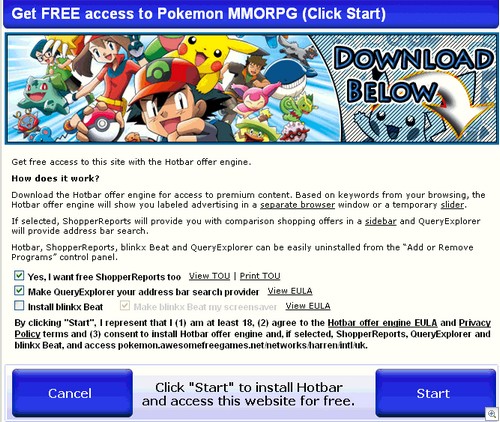 Notable: the minimum age to install is 18+…but how many over 18s play Pokemon? anyway, assuming the end-user installs Hotbar and any optional extras, they’re then taken to another page: 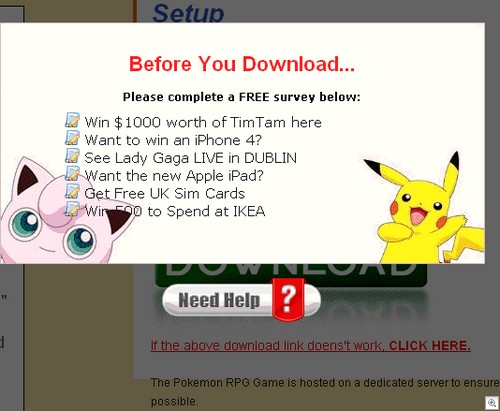 Amazingly (or not), the Hotbar install isn’t enough – they now want you to fill in a survey because “the game is hosted on a dedicated server”. I guess running a Pokemon game costs a lot of money! Again, given that the end-user may well be under 18 you probably don’t want them filling in any of that stuff.

The “game” is available from two download locations. One of them is on free webhosting at Tiscali, and this one is a mess – many of the files inside the zip are password protected, and attempting to run the Exe will make your desktop look like this:

Yes, your PC is pretty borked. Not because the file is malicious – probably because half the bits and pieces it needs to work are still locked away in the Zip. The other download works a lot better, installing the “Pokemon MMORPG” in one go.

So far, we’ve braved a Hotbar install, a bunch of random surveys and played Russian Roulette with download links that might bork your computer if you run the wrong one.

The best is yet to come, however. After all of the above messing around, this is what you end up with: It’s very…uh…brown. Open up the help file, and you’ll probably realise you’ve just been fooled into installing programs and taking surveys to get your hands on… …a very feature limited demo that looks absolutely nothing like the game advertised on the website. Did the website creator just grab a random (and unrelated) demo freely available elsewhere and build a nonsensical MMORPG website around it?

Yep, I think they did. Feel free to steer clear of this one.