The New York Times has posted a notice over the weekend that its web site carried a malicious ad for a rogue security product that originated with an advertiser.

“The culprit masqueraded as a national advertiser and provided seemingly legitimate product advertising for a week. Over the weekend, the ad being served up was switched so that an intrusive message, claiming to be a virus warning from the reader’s computer, appeared,” they said. (NYT notice here.)

That attack-through-advertiser approach was pioneered in 2001 by a hacker who went by the handle Fluffi Bunni. 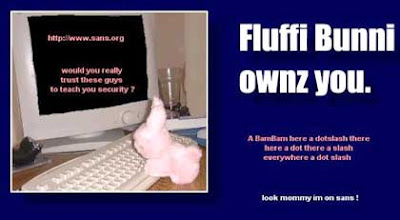 He used a similar hack to deface the web site of security group Attrition.org and of SANS Institute, a well-respected company that provides security training and information. (Story from the former NewsBytes here.)

Although Fluffi Bunni was thought to be a hacking group, ultimately he turned out to be one person who was arrested in the UK.

OK, it was a different age. It was funny then. I guess you had to have been there.

Thanks to Eric Howes.