Two men will pay $8.2 million to settle a U.S. Federal Trade Commission action that charged them with using deceptive advertising to sell consumers rogue security products in 2008. The money will be used to reimburse customers who were defrauded, the FTC said.

Marc D’Souza and his father, Maurice D’Souza, are among seven people connected with Innovative Marketing, Inc. and ByteHosting Internet Services, LLC, which operated out of offices in a number of countries under a variety of aliases.

The FTC said in a news release: “In December 2008, at the request of the FTC, a U.S. district court ordered a halt to the massive scheme. According to the FTC’s complaint, the defendants falsely claimed that scans had detected viruses, spyware, and illegal pornography on consumers’ computers. The FTC alleged that the defendants conned more than one million consumers into buying their software products such as Winfixer, Drive Cleaner and Antivirus XP to remove the malware the bogus scans had supposedly detected.”

Eric Howes, GFI Labs Spyware Research Manager said: “The FTC is to be applauded for taking down what was one of the more prolific and abusive ‘scareware’ operations of the past few years. Although the $8.2 million settlement is likely the best the FTC could gotten under the circumstances, one has to wonder how it compares with what the defendants actually made from their deceptive practices and products. And, sadly, most of the same deceptive tactics employed by Innovative Marketing and its partners are still being used by others to push worthless rogue security products on frightened and confused internet users.”

Antivirus 2008 was another rogue gem from Innovative Marketing (thanks Patrick Jordan.) 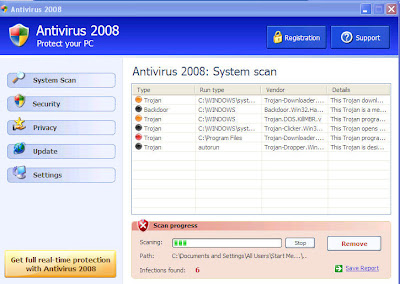