I could talk about how The Matrix was a pretty big deal for me back in the day, or how The Matrix Online is (to date) the only MMORPG I ever liked enough to pay a monthly subscription for, or how I think people doing Kung Fu in bullet time is still the best thing ever.

Mostly, I’ll just show you this: 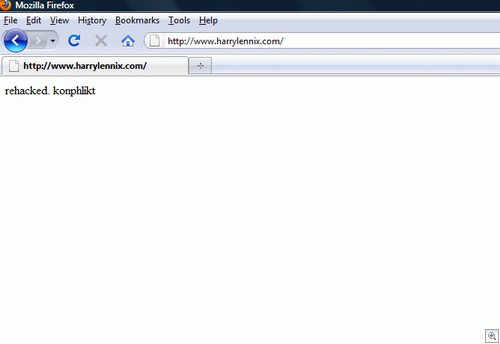 Is there a glitch in the Matrix? You bet. Unfortunately it seems the website of one of the actors from Reloaded / Revolutions (Harry Lennix, who played Commander Lock) has been hacked and is now, bizarrely, the scene of some Cyber Kung-Fu gone wrong as two warring factions go to, er, war.

First the site was compromised by the initial defacer seen in the Google search result. Fast forward a few days and now it’s been “Rehacked” (though not Reloaded) by another individual. Clearly, something is going on here. But what?

Well, it turns out the middle act of the story is where all the action is. For a short period of time, the site said:

snazzy, you are NOT skiddie.. you are FAKE ******g kiddie!
now go to your mom and get the money for this login and give it to me.

Yes, it appears Defacer A didn’t deface anything – merely purchased (or attempted to purchase) the already compromised site from Defacer B, then went on to brag about how they’d hijacked a “famous actor”. Cue Defacer B reclaiming their territory and making sure everybody knew about it at the same time.

The host has been notified, but for now we’ll just have to ponder the irony of a defacement involving an actor whose character never believed in the ability of a man who could hack reality…