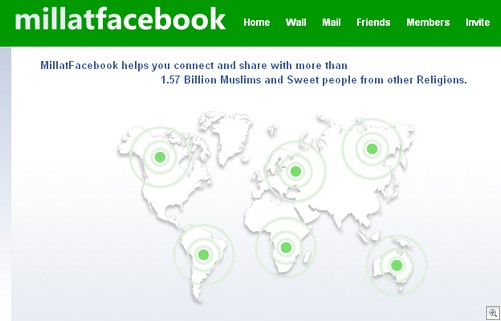 The New York Daily News is reporting that Omer Zaheer Meertold, a 25-year-old Pakistani man, has launched a version of Facebook for Islamic people. He told the HinduStan Times that he was motivated by the Facebook “Everybody Draw Mohammed Day” controversy that resulted in Facebook being banned in Pakistan briefly.

Meertold said: “People from all faiths are welcome to come and interact with one another and understand Muslims.” The site is “to provide a platform to decent people of different faiths to come in harmony.

Observers, however, have found anti-western and anti-Israel material on Millatfacebook.

The two stories we’re going to be seeing here shortly will be:

It would be nice if “…sweet people from other religions” on both social media outlets prevail.