Below we have a rather fetching page located at helpjapan(dot)co(dot)tv: 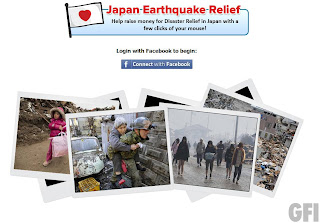 “Japan Earthquake Relief: Help raise money for disaster relief in Japan with a few clicks of your mouse”.

That’s great, except hitting the Connect with Facebook button reveals an app called “your age pic” located at apps(dot)facebook(dot)com/youwilllooklike – at least, it would if it wasn’t currently offline due to an “issue with its third party developer”.

Check out the reviews, which mention friend spamming. Here’s someone having problems with rapid fire messages being sent out.

There’s quite a few off those knocking around in public Facebook searches right now. Given that the whois info for the website looks fake (“the almsn ddsfg Afghanistan”?) and it is hosted alongside what look like Call of Duty Facebook scam sites I doubt we’ll be seeing this app reactivated.

Below, you can see a continuation of the popular “girl commits suicide on cam” scam, sitting on a Facebook app page located at apps(dot)facebook(dot)com/hollevideo.

The app for this one is currently offline, but alongside the surveys and profile editor pages you could also allow the app to “access your basic info, post to your wall and access your data anytime”.

You know, if you really wanted to…

Christopher Boyd (Thanks to Wendy for the webcam app link)