You might want to avoid the temptation to download and run a program being touted on Youtube as a Modern Warfare 2 Cheat Console, which I’ve seen spammed to a couple of gaming forums and a bunch of video sharing websites. Here’s one of the videos in question currently advertising it: 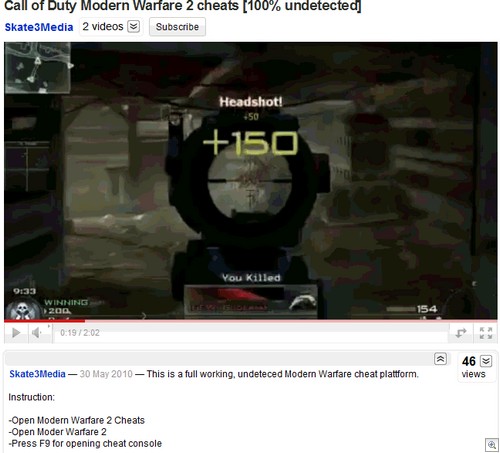 No surprises here that it’s actually a malicious program, and will drop a file called server.exe into your Application Data folder:

From there, endless calls go out to furz(dot)no-ip(dot)biz, although it’s currently out of action so whatever grand plan the creator had in mind isn’t currently materialising. Of course, the no-ip URL could come back to life at some point so it’s probably best not to get too complacent. VirusTotal detections were showing as 7/41 a day or two ago, but it’s gone up slightly to 13.

We detect this as Trojan.Win32.Generic!BT.