Back in February of last year, I blogged about “Why Adware works”.  The answer was simple:  It’s very profitable.  I detailed how much money Claria had made, based on information from their S-1 (the initial filing made with the SEC to go public).

It’s not only Claria.  180Solutions is quite profitable, and has some flashy offices to show for it:

I notice that each of the company’s departments is fitted with large, wall-mounted plasma screen televisions that display graphs charting 180’s daily and weekly sales and revenue numbers. The display nearest the marketing department showed that 180 pulled in more than $1 million in the past week alone serving ads to people who have its adware installed on their computers. Today’s estimated revenue is slightly more than $100,000; the graph showing how much the company has actually earned so far today reads $2,966, but then again it is just after 10 a.m.

The profit extends throughout the entire distribution chain.  A fellow can set up a crappy little website with some stupid videos, and require that in order to watch the videos, you have to download a piece of adware. For each adware install, he gets $.25 from the adware company.  It’s small, but consider some guy with 5 websites that each have 1,000 downloads a day.  That’s $1,250 a day in almost pure profit. The adware company then sells advertising inventory (inventory that happens to be on the desktops of millions of PCs) for big bucks.

Now, we see Direct Revenue was awash in cash, at least in one year we examine.  In 2004, the company made almost $30 million dollars in pre-tax profit on $38 million in revenue.

Of course, this was back in the heyday of DR’s madness, and the numbers are certainly lower now.

The owners can also do well.  While salaries are just great, sometimes VCs will enter the picture, purchasing stock from the owners (this is usually done as an investment into the company and then the owners get the money distributed to them).  We know of three major adware players that have done distributions in this manner. (By the way, the VCs investing in these firms are not small time players, as we can see here, a list which has not been updated with the ABS Capital investment in WhenU and the follow-on investment by Trident.)

To wit, our Dear Friends Alan Murray, Daniel Kaufman, Joshua Abram and Rodney hook got a total of $12 million distributed to them from an investment by Insight Venture Partners back in 2004: 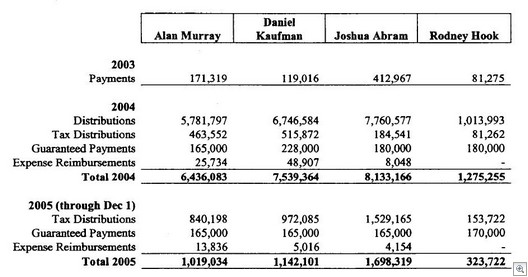 It’s all about the money, idn’t it?

Alex Eckelberry
(With thanks to Ben Edelman)