Yahoo guy Ian Rogers skateboards (something I used to do until fairly recently, when a broken rib made me realize my age) and used to tour with the Beastie Boys.

Ok, so that makes him generally cool. But his anti-DRM rant at to music industry folks is downright inspiring. 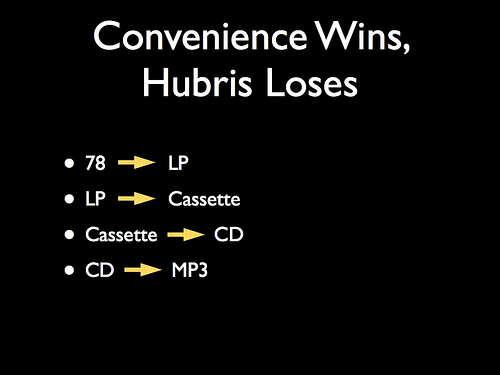 I’m here to tell you today that I for one am no longer going to fall into this trap. If the licensing labels offer their content to Yahoo! put more barriers in front of the users, I’m not interested. Do what you feel you need to do for your business, I’ll be polite, say thank you, and decline to sign. I won’t let Yahoo! invest any more money in consumer inconvenience. I will tell Yahoo! to give the money they were going to give me to build awesome media applications to Yahoo! Mail or Answers or some other deserving endeavor. I personally don’t have any more time to give and can’t bear to see any more money spent on pathetic attempts for control instead of building consumer value. Life’s too short. I want to delight consumers, not bum them out.

If, on the other hand, you’ve seen the light too, there’s a very fun road ahead for us all. Lets get beyond talking about how you get the music and into building context: reasons and ways to experience the music. The opportunity is in the chasm between the way we experience the content and the incredible user-created context of the Web.

Ok, so time for me to rant:

Back in the 80s, I started my professional career at a company called Borland, one of the great success stories of the early microcomputer software business. (While Borland is still around, it’s not nearly the same company as it was, now having moved to Austin, TX from laid-back Santa Cruz, CA and ventured into software for quality assurance testing. Quite different so I can’t speak to the current culture.)

Philippe Kahn, the CEO of Borland, had a very simple philosophy, which molded a lot of my subsequent thinking and practice as I moved forward in the industry.

1. No copy protection.
2. Users agreed to a simple “no-nonsense” license agreement, which simply stated that “software was like a book”, and was written in something close to readable English.
3. If you didn’t like the software, you could get your money back (incidentally, the rate of people returning products was incidental).
4. Products were priced affordably (and this was the linchpin of the whole philosophy).

Simple concepts. But the world was different back then. A lot of people in the business now don’t know how bad things were. But here’s the contrast:

1. Software was copy protected and it was a PAIN. An entire company, Central Point Software, was built around a product called Copy II PC, which allowed you to break copy protection. And even if you were the legal owner of a software program, you still wanted to break the copy protection, so you could actually use the product.
2. License agreements were horribly complex.
3. You couldn’t get a refund if you weren’t satisfied.
4. Software was outrageously expensive.

By doing what he did, Kahn helped boom the business. Many people got started in programming with Turbo Pascal, Borland’s first product. You could actually afford it — it was 50 bucks. Microsoft’s Pascal was something like $500 dollars at the time. The company went on to launch a number of other products, but then got bogged down in some bad acquisitions and subsequently got murdered by Microsoft’s pricing strategies for MS Office. (More on that whole story another time.)

To me, Kahn’s philosophy was completely logical. If you made something people wanted that was affordable. people would buy it and they wouldn’t pirate. And by showing the user respect, and not treating everyone like a dishonest scumbag, guess what: You get more honest users.

And so now we come to DRM. It’s as if no one every learned from our early mistakes.

1. If it’s not stopped, DRM will continue to get more and more complex, with more and more hardware and software interaction, in order to beat the constant stream of people breaking DRM. This will end up breaking applications and the computers themselves. Complexity built upon complexity results in disaster.

2. Hackers will continue to beat the system and so the cycle will continue, getting more and more complex. See 1 above.

3. Some enterprising person will come along and introduce “DRM free” music/videos/games or what have you, and take the market by storm.

The most you want in a licensing control system is “enough to keep the innocent honest”. Such is the case with registration keys for software products — the honest person will pay the registration fee. The dishonest person will always break it. But when you build a system to stop all possibilities of dishonesty, it almost seems that you are building a system based on the logic that “all people are dishonest”, which has as its corollary, “guilty until proven innocent” — in essence, building a system around proving a negative.

Let’s hope that we can create a simple framework for both artists (who really just want to share their creativity with others while getting fairly recompensed) and users to benefit. If we can relieve the system of the DRM virus, it will flow freely and grow.