I am a big fan of Snopes, and use the service routinely when getting some typical hysterical email from a friend.

But for a long time now (probably at least a year), I’ve noticed that they are in bed with Fastclick, which in turn constantly serves one annoying ad on Snopes:

That ad, “Do you want to block Junk Emails?” is for a Zango product — adware (VirusTotal report here). And by running this ad, Snopes, which is highly reputable, is providing an implied endorsement of the product.

Well, here is what your screen may look like after you install this pile of crap (incidentally, with miserable notice and disclosure): 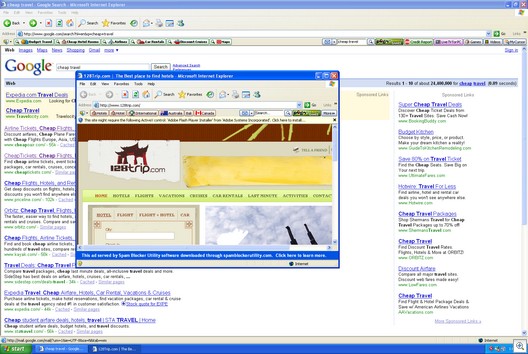 I contacted Snopes about six months ago to complain, but they ignored my message.

1. This is one of only two (corrected: more than two, but this particular one is certainly constant and predominant on the site) popups that constantly come up on the Snopes site (the other one is for a registry cleaner, and that’s probably another story when I have time). It’s not like a one-off bad popup that happens in a rotation with other popups. This particular popup is there practically every time you visit Snopes (see for yourself).

2. This would mean that Snopes is getting paid well for these popups (either pay-per-click or by page views). Advertisers like Zango don’t pay to run ads that don’t get a good response. And likewise, a site like Snopes won’t waste valuable ad inventory on poorly-paying ads. And I firmly believe that the fact that the ads do well is because of Snopes’ credibility.

In other words, Snopes is pushing adware because it makes them money. And I believe it’s a lot of money.

And that’s not an urban legend. It’s shameful.