People still give passwords for chocolate 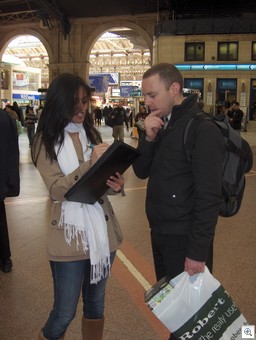 Hmmm… if I give her my password, I’ll get chocolate… but maybe a phone number too…

Now, considering chocolate in Europe is about 100x better than American chocolate, this may come as no surprise:

A survey by Infosecurity Europe of 576 office workers have found that women far more likely to give away their passwords to total strangers than their male counterparts, with 45% of women versus 10% of men prepared to give away their password, to strangers masquerading as market researches with the lure of a chocolate bar as an incentive for filling in the survey. The survey was actually part of a social engineering exercise to raise awareness about information security. The survey was conducted outside Liverpool Street Station in the City of .

This year’s survey results were significantly better than previous years. In 2007 64% of people were prepared to give away their passwords for a chocolate bar, this year it had dropped to just 21% so at last the message is getting through to be more infosecurity savvy. The researchers also asked the office workers for their dates of birth to validate that they had carried out the survey here the workers were very naïve with 61% revealing their date of birth. Another slightly worrying fact discovered by researchers is that over half of people questioned use the same password for everything (e.g. work, banking, web, etc.)