It’s a general and approximate representation of a sample of our users but it’s interesting to play with (we did have a version floating around in the past but it was not broadly known about — except for one writer who mentioned it in his newsletter). 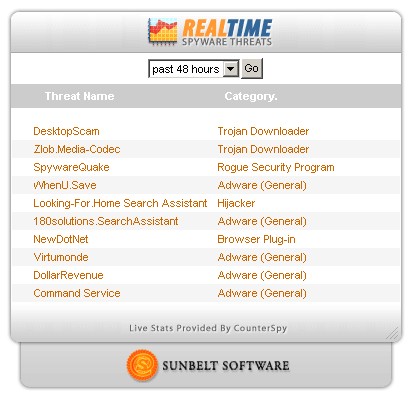 You can see the live stats here.

And here’s something curious — recently we saw a number of ancient pieces of adware on the top-10 list:

The culprit is the new rogue anti-spyware app, TitanShield AntiSpyware. Incredibly enough, this app loads a bunch of bogus spyware/adware, which is then proceeds to detect.

CounterSpy is detecting both the Reg keys and, in some cases, the files (based on file name/path match) and reporting that the PCs are infected with those ancient spyware/adware programs, when in fact what’s really going on is that TitanShield loaded a bunch of bogus apps.

It’s hard to call these false positives, and the junk really should be removed. It’s just that the users’ PCs aren’t infested with the above apps but rather TitanShield AntiSpyware.