“Save Japan” websites: be careful

Good question. Everybody wants to help Japan right now, but as you can imagine scammers are out in force. It’s hard for people to tell what’s real and what’s a fakeout, so we’re going to take a look at the site mentioned above. It’s called helpjapan(dot)jp, and looks like this: 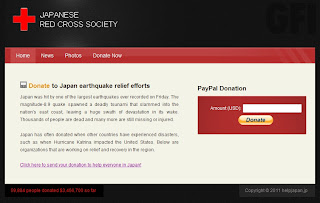 As you can see, it sports a version of the Japanese Red Cross Society logo, but doesn’t carry any of the copyright notices, information or contact details of the real thing. Notice that the real thing has a very specific way of accepting donations, unlike the above site which is asking for Paypal and Alertpay donations (the Japanese Red Cross society also accepts payment via Google Checkout, through this page – and the details listed there don’t appear anywhere on this particular site at payment or elsewhere either).

The Paypal link takes you to a German language donation page: A site sporting Japanese Red Cross logos yet asking for Paypal donations is very curious, because as this news article from yesterday mentions, the Japanese Red Cross Society DO NOT accept Paypal at this moment in time – yet strangely, we have a site here claiming otherwise.

The Alertpay page gives us this: 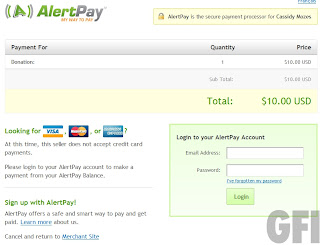 At the top, you can see the payment system is being used by someone called “Cassidy Mozes”. The savejapan.jp domain was registered on the 12th of March: 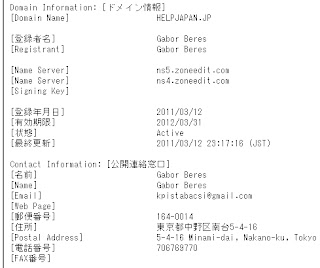 The address listed above isn’t the address of the Japanese Red Cross, and the closest location I can find from the Whois above appears to be a vintage record collector. Additionally, the only reference to the above email address seems to be here, on a pay to click forum.

Is this legit? Well, it doesn’t seem to be registered to the Japanese Red Cross, sports no official information, has a collection of “news articles” that are simply links from a feed, accepts Paypal donations under a Red Cross banner which the legitimate URL doesn’t process yet, seems to indicate that 60,000 people have donated more than three million dollars via the site (which is clearly impossible) and doesn’t have any links in search engines or elsewhere confirming reliability.

We’ve contacted the Japanese Red Cross to see if they know anything about this, and will update when we hear back. In the meantime, just be aware that there are plenty of scams which are strikingly similar to the above example from Symantec (that one sports an American Red Cross badge – it’s almost like there’s a pattern forming), and while I’d hate to steer people away from a genuine donation site, I’d strongly advise to only give money through tried and tested channels.

You’re risking throwing money into the void otherwise, and that certainly isn’t going to help anybody in Japan.