Spammers Hone In on Google+

Our friends at Sophos has found what we consider as, probably, the first crime ever targeting Google+: fake pharma spam. Due to the high demand of G+ invites being thrown at Google, to the point that the company actually had to cease the invitation process for the beta release of their fledgling social networking site, it is no surprise that spammers have latched onto this one as their latest target (and growing favourite?) to date.

Better than having malware there, if you ask me.

That, of course, does not change the fact that receiving supposed G+ invitations leading to fake pharma site is annoying.

“The spammers are no doubt hoping that the email will be too hard to resist for many people eager to see Google’s new social network, although just how many users will be tempted to buy drugs online is a mystery.” concludes Sophos regarding this report. 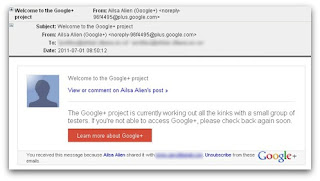 Screenshot of the G+ spam from Sophos

Personally, I am a bit jolted by the fact that spammers didn’t take long before they push a campaign to take advantage of Internet users badly wanting to be put in circles. It’s the current “it” thing, after all. Not to mention the current perfect target of any threat attack, and spamming was the first. I can only guess what could come next after that.

It’s a jungle out there, folks. As always, please stay safe. 🙂