The “like” function on Facebook has always seemed such a friendly thing. It’s an Internet-age way for Facebookers to engage in that most primal of conversation pleasantries: “hey, I like that too.”

It’s just amazing that it’s turned into such an effective vector for cheap advertising, affiliate click sucking and bait for rogues and malicious web sites. The words “tawdry” and “silly” also come to mind in the case at hand.

Today we checked out what was behind a surge of Facebook “like” messages about a girl committing suicide. This seems to be a theme in the last month. There were several campaigns going on at once and some were “liked” tens of thousands of times.

We’ll give away the ending here really fast. In order to see the suicide story you were required to install adware. Your reward was a link to a six-month-old news story on an Indian entertainment news site.

We are 19 years old according to the goat Facebook account that these folks had access to, but, no matter, we chose to play Pac Man in order to “unlock” the content. That, of course, required us to install an innocuous, though annoying piece of adware. 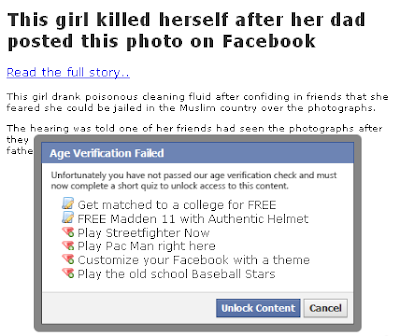 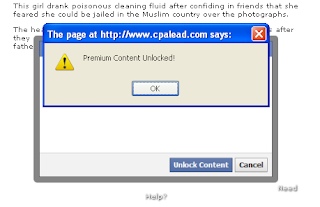 And our prize was… 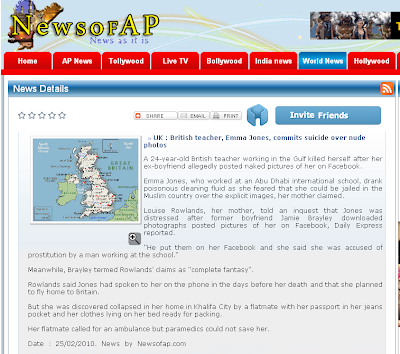 …a link to a February news story on an Indian entertainment news site “NewsofAP” (which has nothing to do with the Associated Press except the cachet of the letters “AP,” we might point out.)

That took us down a rabbit hole into another whole wacky Internet wonderland:

Their “about us” includes the line that they use “’IMPARTIALITY’ as a weapon.” They also write that although they will be reporting “gossips” they assure their readers that they will double check with the “concerned people to make sure they are quite authentic.”

Thanks Wendy and Matt.