Octoshape, the Danish P2P video “enhancer” that came into prominence after it was offered on CNN’s site during the presidential inauguration in January, still has only an obscure link to its EULA where it explains that it IS peer-to-peer software running on your machine.

Such a minor notification is hardly sufficient to tell potential users of what they’re really installing. There also is only obscure notification that you, your company or your ISP is paying for the bandwidth to deliver CNN’s content,

In order to meet bandwidth demand for streaming video, CNN began using this Adobe Flash Player add-on, which joins the user’s machine to a P2P network. Video content is then delivered from/to other peers on the grid. CNN’s streaming live video actually plays fine without the Octoshape installation.

The company, Octoshape ApS of Copenhagen, Denmark, has taken quite a bit of heat and has made some small concessions, but they still basically hide the information that Octoshape is a P2P app that sends the video from your machine to other machines and uses your bandwidth to deliver content. CNN could be part of the problem too, since it controls a good part of the install process.

Within the prompt that asks you to agree to the installation of Octoshape, there is a clickable blue question mark, which takes the user to additional information, including an FAQ, EULA, and Privacy Policy. 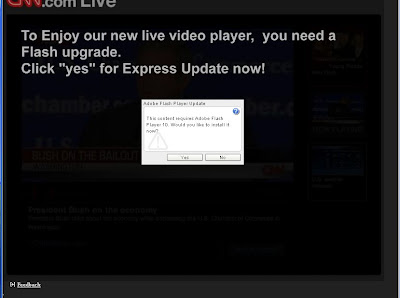 Most users will never see that additional info, though. So, the key facts regarding the P2P nature of the application are still not put before the user in a clear, straightforward fashion.

A good background story can be found on the Windows Secrets blog here.