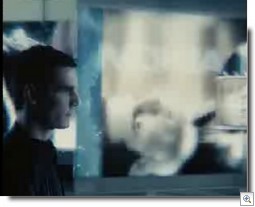 Minority Report was a fun film, and in it, you had some great examples of cool new technology, one of which might even be around the corner.

However, one thing you may recall was the use of behavioral marketing — as Cruise’s character walks through the mall, live-motion ads are targeting him. This was not happenstance — the producers hired real advertising people to figure out what advertising of the future might look like.

Well, this type of targeted advertising is the ultimate fantasy of marketers, and it’s something that’s happening right now, in all kinds of forms. And one of the potentials is in mobile phones, as MediaPost describes.

Mobile carriers are sitting on one of the fattest, highest, most granular piles of consumer behavior data the world has ever known. And most of them haven’t a clue how to use it as a foundation for media and marketing. Sprint’s media group recently hinted that it would be using some kind of behavioral targeting in its newly launched ad networks for phone media, but I am not sure what, if any, form that will take. At a mobile marketing conference last spring, Cingular/AT&T’s content honcho Jim Ryan admitted it had incredibly detailed data for marketers –but not in a form they could access in any meaningful way yet.

In the mobile world, parsing your client base by over and under age 34 is still considered nano-segmentation. The possibilities for BT off someone’s commercial calling patterns is as scary as it is enticing. How much would Pizza Hit pay to get a coupon on the phone of the guy who calls Domino’s once a week? How much would Domino’s pay to keep Pizza Hut’s coupon from its customer? Wisely, the carriers will not give up that user or that data without due diligence over its consequences. But the irony is that carriers need BT more than any other medium. That phone deck is the world’s worst interface because it is so small and so dumb. Personalized, dynamic content served to my flip phone is the inevitable solution, but tracking my phone browser behaviors may be the best way to customize the user deck according to user habits.

Some of this may be unnerving to those concerned about privacy (“How much would Pizza Hit pay to get a coupon on the phone of the guy who calls Domino’s once a week?”).

What do you think? What are the dangers and pitfalls of having behavioral marketing become part of our lives?

Where do we draw the line?