This you gotta read 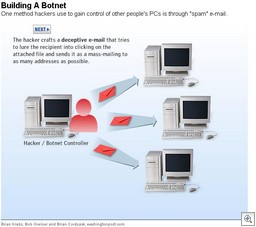 Brian Krebs at the Washington Post has been working for months on a story on botnets.  It’s finally hit the light of day.  This is solid reporting — Brian spent months researching and working on this piece.

It’s starts with a story about a hacker, 0x80, who controls a large botnet at his pleasure.  Of course, these are machines that he can install spyware on to make affiliate commissions.

In the six hours between crashing into bed and rolling out of it, the 21-year-old hacker has broken into nearly 2,000 personal computers around the globe. He slept while software he wrote scoured the Internet for vulnerable computers and infected them with viruses that turned them into slaves.

Now, with the smoke of his day’s first Marlboro curling across the living room of his parents’ brick rambler, the hacker known online as “0x80” (pronounced X-eighty) plops his wiry frame into a tan, weathered couch, sets his new laptop on the coffee table and punches in a series of commands. At his behest, the commandeered PCs will begin downloading and installing software that will bombard their users with advertisements for pornographic Web sites. After the installation, 0x80 orders the machines to search the Internet for other potential victims.

You can read the whole article here.

Segues, plazma screens and beautiful people: Brian also went to out to 180Solutions while researching this story.  A lot of what he found when there was cut from the botnet story for space considerations.  So, he posted a separate article on his blog about his experiences out there.

I notice that each of the company’s departments is fitted with large, wall-mounted plasma screen televisions that display graphs charting 180’s daily and weekly sales and revenue numbers. The display nearest the marketing department showed that 180 pulled in more than $1 million in the past week alone serving ads to people who have its adware installed on their computers. Today’s estimated revenue is slightly more than $100,000; the graph showing how much the company has actually earned so far today reads $2,966, but then again it is just after 10 a.m.

There’s also a nifty graphic of how botnets are created that you can see here.

Well done Brian.  You have done a great service to the community.