The website viewmorepix(dot)com is currently being spammed out on services such as Twitter, and I thought it was worth poking with a stick. 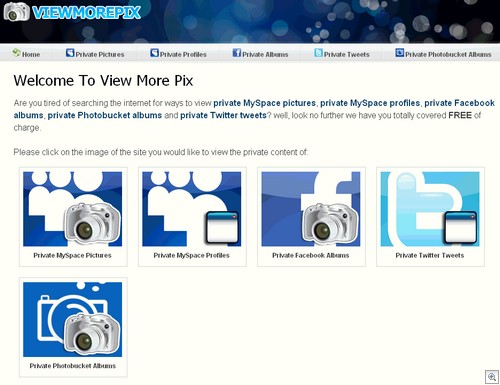 Yes, this website claims it will let you view all sorts of hidden content – pictures on Facebook, protected Tweets and private profiles on Myspace to name but a few.

Who wants to bet on it working? Oh right, nobody. Well let’s get this train wreck moving with the hilariously poor Disclaimer:

Get this – you build a website specifically designed to convince people you can view hidden and private content. You claim to have all sorts of funky tools that can bypass the services mentioned. You post lots of Youtube videos that no longer exist due to terms of use violation. Then you say “You agree not to use this site for purposes such as gaining access to profiles which you do not own, respect the privacy of others and access only the profiles and images you have rights to”.

I don’t know about you, but that kind of makes the concept of “View More Pix” somewhat redundant. 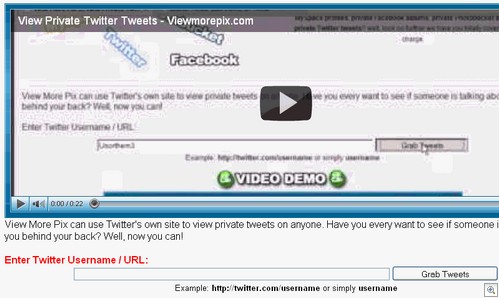 “Show tweets”? This is going to be a gigantic flop, isn’t it? 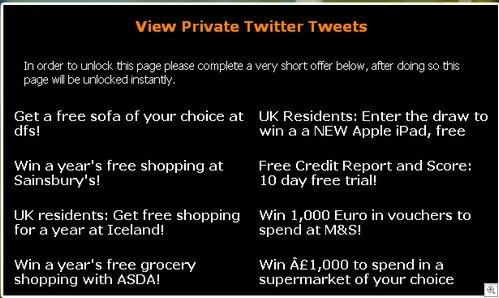 Ah well. You do get to see those awesome protected tweets after filling in one of the surveys though.

The only slight drawback is that they’re written in invisible ink.

Next up, their dire “method” for viewing private Myspace profiles. The amount of Facebook “Likes” the below page has had is rather depressing, so try to focus on the various steps they give you instead:

What comes next is genius, sort of: 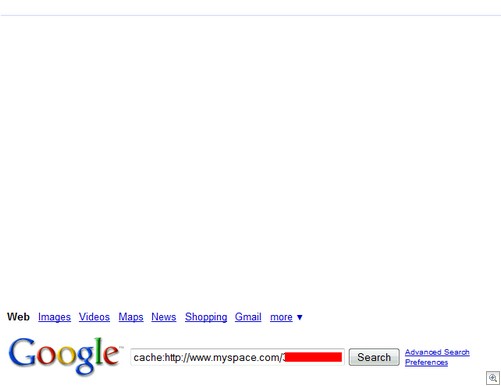 You get a small box with a Google Cache link to the profile in question, in the vague hope they might have had their profile public beforehand.

They do suggest being logged in when you try this, but it doesn’t seem to make any difference. There’s a surprise.

All in all, I can’t say you’re going to get very far indulging furtive needs on this particular website. Maybe you should just send a follow request or ask if you can look at their pictures instead…