You’ve probably already heard about what happened with Youtube yesterday – an XSS vulnerability allowed people to perform all manner of, er, interesting things on videopages (mostly involving Justin Bieber, but quickly spreading to random videos). It started with the ability to block fresh comments, but quickly moved into the realms of scrolling text (the red “Come to Korea”):

…then delved into everything from Goatse redirects (if you don’t know, don’t ask – and don’t go Googling it in work, either) and text overlays to particularly nasty shock sites such as this one: 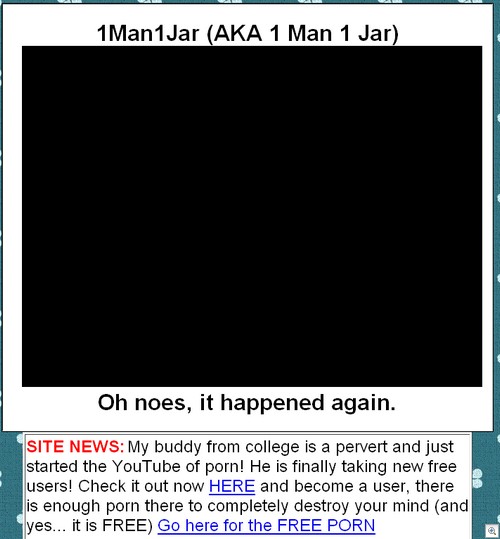 You REALLY do not want to go searching for the above. Trust me on this.

Google patched it up relatively quickly – however, I was more interested by other aspects of the attack.

Incorrect  information filled sites such as Twitter and quickly took on a life of its own. This was on the frontpage of Twitter with over 100+ retweets shortly after the cut and paste code action took place:

Advising people to steer clear until the problem is fixed? That’s good. Lots of people running around telling lots more people that there’s a “virus”? That’s not so good.

The “virus” talk went viral, and you can see a huge slice of people amplifying the “virus” talk here. Even hours after it’s been fixed, people continue to talk about “getting infected” by a nonexistent virus and there’s a lot of unscheduled scans now taking place:

This next chap took a swing at the “common folk”, which inevitably resulted in him having to apologise for something else afterwards:

Here’s a popup on one of the videos, courtesy of 0ph3lia:

“Malware has been detected. Please go to my computer, C Drive, Windows and delete the folder named System32 to correct this error”.

Of course, by the time the story had appeared on various news sites something like the above (a piece of self inflicted computer destruction) had become an honest-to-goodness exploit:

That is indeed “scary stuff”, but for entirely different reasons. Despite the attack having been fixed, there’s going to be a lot of screenshots like this doing the rounds for some time.

Something else to think about: if this exploit had been discovered by a professional moneymaking outfit, there could have been all sorts of subtle attacks taking place for a long time – not good, given the apparent simplicity of the attack.

A collection of Youtube videos were obscured by a large, black overlay – if you held down your mouse button and highlighted inside it, you’d reveal some text: 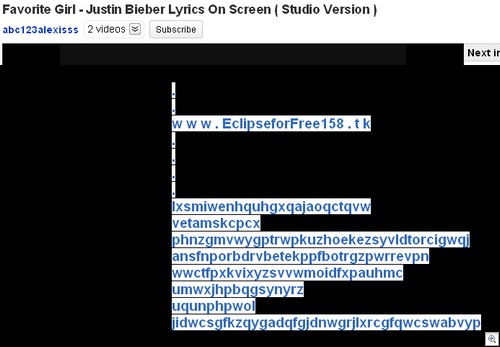 You’ll never guess what kind of scam artist jumped on the bandwagon: 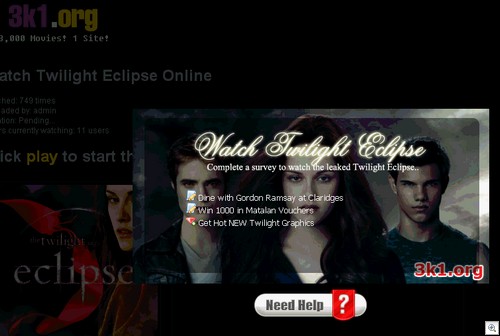 Yes, one of those wonderful “fill in the survey to watch a film” portals that never actually seem to give you the promised reward – although in this case the reward is a Twilight movie so we’ll let them off with it this time.