Zombies. Whether they’re shuffling Romero types, the wisecracking “send more cops” variety or even the crumbling Fulci efforts it’s important to be prepared (no, I’m not counting the ones that run. Those are stupid).

As you can see, I’m ready for pretty much anything:

Nobody is immune to the zombie menace, however, so I thought it might be useful to let you go forth and warn friends & relatives about a new zombie scam popping up on the internet.

Dead Rising: Case Zero has just been released on XBox Live as a standalone chapter for the upcoming Dead Rising 2, and of course scammers want a tasty slice of zombie pie.

Forums and sites such as Youtube (surprise!) are filling up with posts and videos promoting various websites claiming to offer “cracks” and redeemable download codes to let you get your hands on the game for free. 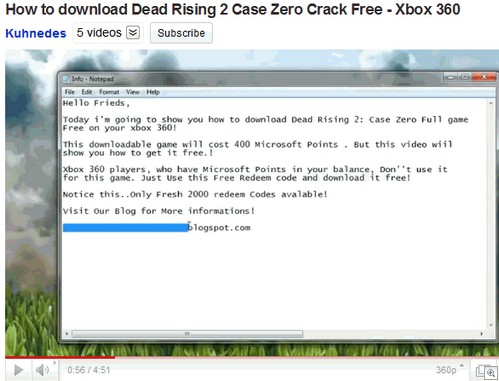 I’ve also seen a few videos claim to offer up a PC version (lies) and another one offering up a “Wii version” (more lies, these versions of the game don’t exist). 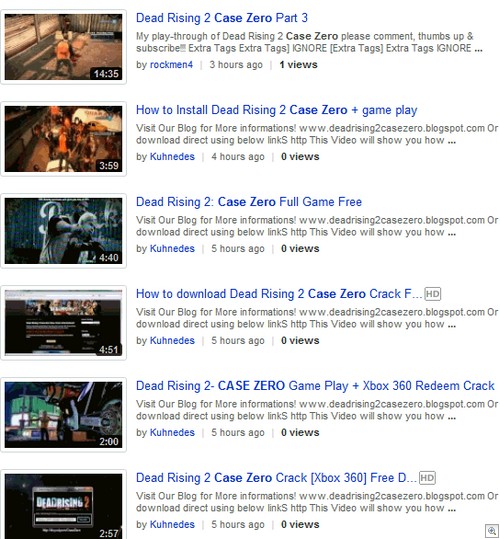 I took this screenshot a day or two ago; let’s make a tenuous reference to zombies and say they’re now multiplying uncontrollably, and you’ll probably have to go live in a supermarket or whatever.

Anyway. The majority of the videos seem to link to one particular website – deadrising2casezero(dot)blogspot(dot)com. Here it is: 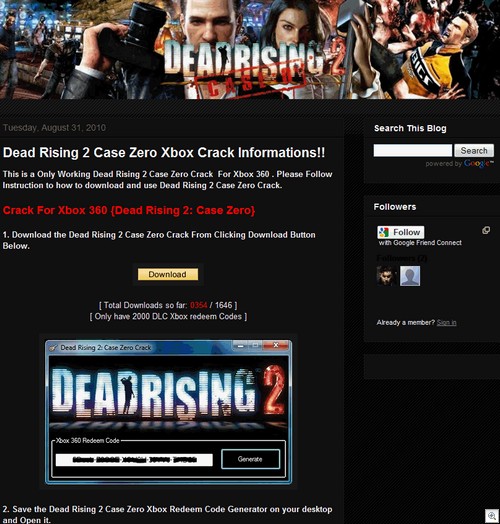 There’s a lot of nonsense on the site about the download being restricted to the first 2,000 users – and the “total downloads so far” indicator seems to be stuck on 354 people. Following a similar pattern to the recent DC Universe Online scam, attempting to download the program will give you some wonderful surveys to fill in. 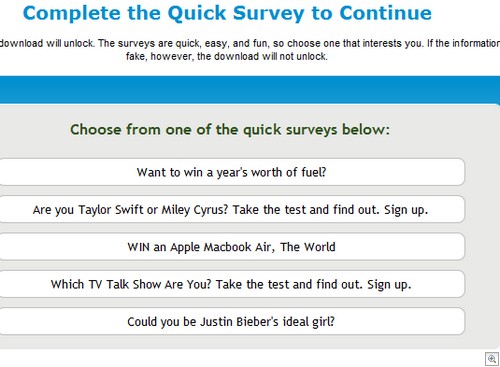 I’m almost certain I have more important things to worry about in the middle of a zombie apocalypse than whether or not I’m Justin Bieber’s ideal girl but oh well. Filling in one of the surveys will give you this somewhat unimpressive program on your desktop:

I say unimpressive, because it’s about as much use as slapping a zombie in the face with a wet newspaper. Just like the DC Universe fakeout, the program will “generate” about 20 or so codes that just repeat themselves endlessly.

A bit like these “free app / here’s a survey” scams, perhaps.

Now if you’ll excuse me, I’m off to meet an ironic doom at the hands of some running zombies. While I’m donating my brains to the undead community, please try to avoid any and all “freebies” related to Dead Rising: Case Zero.