Where people are spending money on the ‘net

Ok, so maybe you have to be a marketing wonk to care about all this but I find this mildly interesting.

There is some interesting stuff in there.

Growth in the Entertainment/Lifestyle category, driven by online music sales, has rippled through most every aspect of this report. Not only does growth in the Entertainment/Lifestyles category account for a large portion of the overall growth in online paid content spending; it accounts for the ballooning figures for single purchase content sales (now 20.1% of all revenue for paid content, up from 11.0% in 2003) as compared to subscriptions, and for the increasing percentage of all online paid content income attributed to low-price-point sales (under $5 per transaction), as compared to mid- and upper-range figures.

So paid online music sales is actually a growth area.  No big news there, but perhaps it will make the Luddites feel better.

Now, if you’re wondering why you get all those popups for online dating, the answer is here.  It’s a big business: 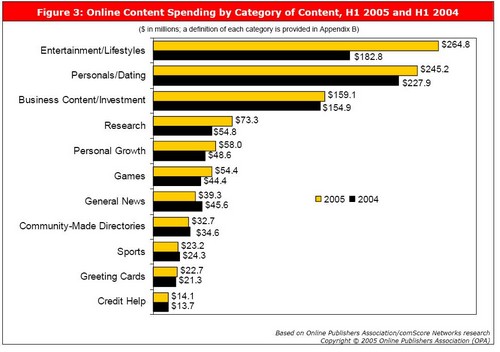 Conclusions of the report: